Ancient Assam was known as Pragjyotisha in early times and as Kamarupa in later times.

The name Pragjyotisha stood for both the kingdom and capital city. The earliest mention of the city of Pragjyotisha is found in the Ramayana and Mahabharata. According to the Ramayana,this city was founded by Amurtaraja son of Kusa and grandfather of the famous stage Viswamitra. There are different options regarding the origin of the name”Pragjyotisha”. According to the Kalika Purana,”here Brahma first created the stars and hence the city is called Pragjyoitishpur,a city equal to the city of Indra.

”Gait says about the ancient assam history that the name,Pragjyotishpur ”is interesting in connection with the reputation in which,the country has always been held as a land of magic and incantation,and with the view that it was in Assam that the Tantrik from of Hinduisim orginated.

”The name Pragjyotisha,however,is most probably derived from the term Prag-jyotish,meaning the eastern light. Hence it appears to mean ”the city or land of eastern light.

”The kingdom came to be known as Kamrupa during the Purantic times,based on the legend that Kamadeva, the god of love, the Indian Cupid,who was destroyed by the fiery glance of Siva returned to life in this country,According to B.K. Kakati, the name ”Kamrupa” is derived from an Austric formation like Kamru or Kamrut, the name of a lesser divinity in Santali, which justifies the association of the land with magic and necromancy. All this can be explained in the light of the cult of magic and sorcery prevalent in the land.

The first historic reference to the kingdom of Kamarupa is made in the Allahabad Pillar Inscription of Samudragupta, assigned to the middle of the fourth century A.D.

Geographical Extent : The geographical extent of ancient Assam history of the kingdom of Pragjyotish-Kamarupa varied from time. But one thing is certain that its northern and south-western limits extended much beyond the present state of Assam. The references in the Ramayana and the Mahabharata that the country stretched as far as the sea and that it was a partly hilly country.

”In the Mahabharata,Bhagadutta,the king of Pragjyotisha is called Sailyalaya, (dwelling among the mountains)and refers to his troops as consisting of the Kiratas, Chinas and dwellers of the sea-coast. The Varaha mountain referred to the Ramayana was possibly the Assam range,while the sea mentioned there was the very low-lying and water logged country immediately to the south of these hills which in old days was perhaps connected with the Bay of Bengal by the estuary of the Brahmaputra .This was no doubt ” the eastern sea known to the ancients”.

Kiratas were the Mongoloid people of this region and the Chinas probably meant the Tibetans and the Bhutanese. The dwellers of the sea coast were evidently the people living in the marshy of Sylhet, Mymensingh and Tripura.

On the other hand, it is stated in the Ramayana the Amurtaraja, the founder of Pragjyotisha performed his austerities on the bank of the Kausika,which indicates that its western limit extended as far as the river Kosi. On the basis of these references, Pargiter concluded that at the time of the great Mahabharata war,the kingdom of Pragjyotisha included the greater part of modern Assam,and together with Jalpaiguri,Koch Bihar, Rangpur, Bogra, Mymensing,Dacca, Tippera, part of Pabna and probably a part of eastern Nepal. 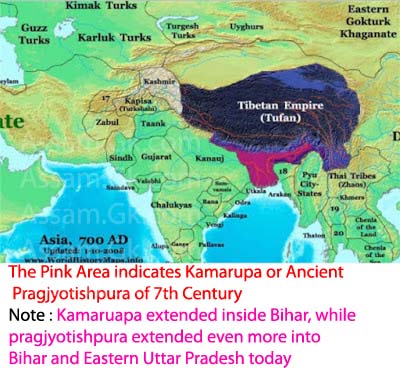 It appears from the Buddhist records and the Greek accounts of the 14th century B.C.,that the southern boundary of Pragjyotisha was the Lohita Sagara, the western boundary was the river Kousika,and the northern boundary was the Bhutan hills and part of Nepal. From the accounts of Yuan Chang,it has been surmised that the kingdom of Kamarupa of his description included a portion of Bihar,a portion of Northern and Eastern Bengal,and nearly the whole of Assam Valley. Some portion of Bengal were under Kamrupa from the time of Bhaskara Varman who ruled in the first half of the 6th century A.D.to the time of Harshadeva. 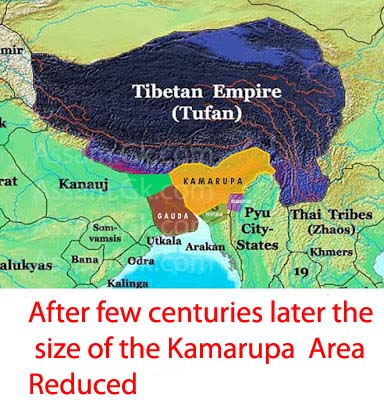 (c.725-750A.D.) According to the most of the Puranas,the Kingdom of Kamarupa extended upto the river Karatoya in the west. The eastern limit of the kingdom,however,cannot be definitely ascertained. According to the Kalika Purana,when Naraka was ruling in Pragjyotisha,his friend Bana was ruling in Sonitpur, identified with the modern town of Tezpur. It is generally believed that Bana’s Kingdom included the modern districts,of Darrang, Sonitpur and Lakhimpur. About the same time,there existed in the extreme eastern part,another independent Kingdom called Vidarbha.

Kapili valley was initially a part of the Kingdom of Pragjyotishpur-Kamarupa, because Davaka identified with the Kapili valley is mentioned as an independent kingdom in the Allahabad pillar inscription of Samuragupta. It was Kalyanavarman (c.420-440A.D),a predecessor of Bhaskaravarmana,who incorporated Davaka with the kingdom of Kamrupa in the first part of fifth century A.D.

From this it can be concluded that eastern Assam valley was outside the perimeter of Pragjyotisha but subsequently the kingdom extended towards the east even beyond the Dikhou river.

Foundation of the city of Harupeswara by the Salastambha kings, the Tezpur grant and the Parvatiya plates of Vanamala, and the Nowgong grant of Balavarman during the 9th -10th century A.D. also point to the extension to the Kingdom to its eastern limits.

In the Jogini Tantra,which is probably a later work, Kamarupa was said to have extended from the Karatoya river on the west to the Dikshu (Dikhou)on the east,and from the mountain of Kanjagiri on the north to the confluence of the Brahmaputra and the Laksha on the south. The kingdom thus included not only the whole of the Brahmaputra valley but also parts of northern and eastern Bengal, parts of Bhutan,the Khasi and the Garo hills and the northern part of the district of Sylhet. In any case,it is clear that Pragjyotisha or ancient Kamrupa was a much larger kingdom that most of the other kingdoms mentioned in the Mahabharata and most of the sixteen Mahajanapadas existing during the time of Gautama Buddha.

Capital Cities : According to the traditions,all the king of ancient Assam history starting from Mahiranga Danava,had their capital in and around Guwahati, which was known as Pragjyotishpur meaning of the capital of the Pragjyotisha kingdom. The Mairang hill, named after Mahiranga Danava,which is situated at a distance of about 12 km.south of Guwahati on the Shillong-Guwahati Road,indicates his historicity. In the like way Naraka’s historicity is indicated by the existing village of Narakasurgaon,which includes the Narakasur hill, 20. P.C. Choudhury : The History of Civilization of the People of Assam to the Twelfth Century A. D. at a distance of about 5 km. to the south west of modern city of Guwahati.

According to K.L. Barua, the modern site of Dispur, situated about 3 km. to the east of Narakasurgaon, is believed to be the abbreviation of Pragjyotishpur.

In later period, during the rule of the Salastambha dynasty, king Hajara Varman (c.815-835 A.D.) is said to have shifted his capital to Haruppeswara, identifies with the modern town of Tezpur. Subsequently during the rule of the Pala dynasty the capital was again shifted to Pragjyotishpur and named as Sri Durjaya .

About the end of the eleventh century, the capital of Dharmapala (c.1095-1120 A.D.) was at Kamarupnagar, which is identified with North Guwahati. According to P.C. Choudhury, Kamarupanagar was ”but an extension of the old capital” of Pragjyotishpur. Kamarupanagar remained the capital until the later part of the thirteenth century A.D., after which it was shifted to Kamatapur. It is very probable that the king of ancient Assam history, who ruled over territories extending from northern hills to the southern sea, had more than one camp capitals, which were also capital of some other dynasties ruling at those sites at different times.

One such site is Sonitpur (modern Tezpur), where once the traditional king Bana or Banasur ruled till he was vanquished by Sri Krishna after the secret marriage of Aniruddha, the grand-son of Sri Krishna with Banas daughter Usha.

Another such site is at Kundila Nagar (modern Sadiya)in the easternmost corner of the Brahmaputra valley, where the legendary king Bismaka, the Father of Rukmini who was the consort of Sri Krishna ruled. Mention may also be made of Bitargarh fort of Jalpaiguri and Kamatapur of Koch Bihar. But there is no doubt that throughout the ancient period, when the kingdom of Pragjyotisha or Kamarupa included, besides the Brahmaputra valley, part of east Bengal, its capital was situated at Pragjyotishpur, which is known as Guwahati in the modern times, as there is no other place which all exactly fit in with the description of the ancient inscriptions,wherein the capital is stated to be ”situated on the bank of the Lauhitya” being surrounded by hills on all sides and crowded with dense forests.

***This Notes are the Self Studies and prepared by the Author of Assam Gk taking help and reference from Govt. of  Assam, Wikipedia, World History Maps and published work of other Authors.

2 thoughts on “Ancient Pragyotishpur and Kamarupa with its Geographical Extent”